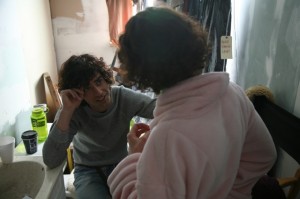 I would like introduce you to my co-star, Hamish Linklater, aka: your future imaginary boyfriend. Hilarious, whip smart, handsome, reads good books, etc. (Also completely married to an equally smart, beautiful, writer/director, which is what really sealed the deal for me. Nothing is more appealing than a man coupled with a for real woman that I would want to be friends with. It let me know that there was room in his reality for a complicated woman like me.) After a couple of sweaty auditions (I’m the one sweating, because I have to act with the actor, to see if I can), and a fateful walk, I knew he was the one.
The first thing we did together was go to a Clippers/Nets basketball game, he had tickets. Hamish would occasionally yell something really specific to a player and I was worried the player might hear and get distracted or get his feelings hurt, but Hamish said No, this is what you do, this is part of the game. At one point there was this thing called “Kiss Cam” – the live-cam would zero in on couples in the bleachers; when they saw themselves on the screen they had to kiss. Hamish and I sat through this totally silently, shaking with fear that the Kiss-Cam would land on us and we would have to kiss like the real couple we were professionally committed to becoming, but weren’t yet. But it didn’t land on us, and later we laughed very hard at our mutual terror.
For our next meeting I built a little cave in a closet in my house. I lined the floor with couch cushions and blankets and pillows and set up delicious food on plates. I asked him to bring his photo albums and favorite music and then I locked us in there and we told each other the stories of our lives and played each other songs, trying to explain why they meant so much to us. Looking back, I don’t think this automatically created the four-year history that our characters have, which is what I hoped it would do. But it was a ritual that required us both to care a lot, to be vulnerable, to feel stupid, to cry. So that later, when we did all those things on the set, it wasn’t for the first time. 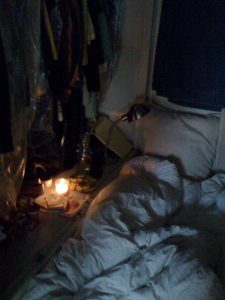 Hamish threw his whole self at this movie, and it shows. I can’t wait for you to see him stop time with the sheer force of his will, and then start it again, with his arms and resignation.
As we prepared for and then shot the movie, we traded clues as to who who were, emailing each other snapshots (I think Jason would wear these shoes) and sudden revelations. In closing, I send you a picture that struck me when we were rehearsing – it’s Rodin’s sculpture, Orpheus and Eurydice. I really don’t know anything about mythology, or Rodin, so it was just the picture itself I liked, and sent to Hamish. Below is his email back, typed with one finger on his phone. 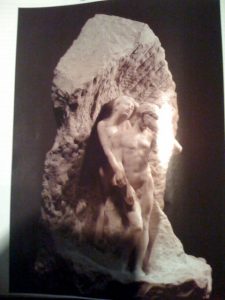 I have a lot to say on this. (surprised?) here’s the speech. I’m Orpheus right? You’re eurydice right? U don’t want to be looked at by me right? I’m heading out of hell to the ocean but I don’t look back because I know you’re not there, right?
I always thought Orpheus gets to her because of his artistry, but loses her because of being human. Like art is deathless but everything human, ie love or doubt, is mortal and once it dies it’s dead.
The image itself is really good. Can we do that in the movie? The blind reverse spoon? Also how r u feeling about Jasons vinyl collection? h