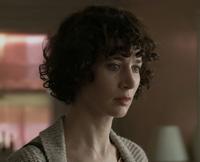 Miranda July (Sophie, Director, Writer)
Miranda July is a filmmaker, artist, and writer. Her videos, performances, and web-based projects have been presented at sites such as the Museum of Modern Art, the Guggenheim Museum and in two Whitney Biennials. July wrote, directed and starred in her first feature-length film, Me and You and Everyone We Know (2005), which won a special jury prize at the Sundance Film Festival and four prizes at the Cannes Film Festival, including the Caméra d’Or. Her fiction has appeared in The Paris Review, Harper’s, and The New Yorker; her collection of stories, No One Belongs Here More Than You (Scribner, 2007), won the Frank O’Connor International Short Story Award and has been published in twenty countries. July created the participatory website, learningtoloveyoumore, with artist Harrell Fletcher and a companion book was published in 2007 (Prestel); the work is now in the collection of The San Francisco Museum of Modern Art. Eleven Heavy Things, an interactive sculpture garden she designed for the 2009 Venice Biennale, was on view in Union Square in New York in the summer of 2010. Raised in Berkeley, California, she currently lives in Los Angeles. www.mirandajuly.com 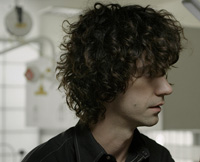 Hamish Linklater (Jason)
Hamish Linklater is an acclaimed film, television, and theatre actor. He just wrapped shooting on Battleship for director Peter Berg for Universal Pictures, and is currently in production for Lola Vs. with Greta Gerwig & Orlando Bloom for Fox Searchlight. His other film credits include Fantastic Four, Final Draft and Groove (Sundance 2000). Previously, he could be seen as Matthew in the CBS hit comedy The New Adventures of Old Christine opposite Julia Louis Dreyfus (Seinfeld). In summer 2010, Linklater appeared with Al Pacino in The Merchant of Venice at the Delacourt Theater, where he was nominated for a Drama Desk Award for Twelfth Night the summer previous. Other New York theater credits include The School for Lies at Classic Stage Company; Good Thing at The New Group (also in L.A.); Romeo in Romeo and Juliet for the Acting Company; Laertes opposite Liev Schreiber in Hamlet, The Square and Love’s Fire, all three at The Public. Notable regional credits include starring in the world premiere of Richard Greenberg’s The Violet Hour at South Coast Rep, where he also played the title role in Hamlet; The Singing Forest at Long Wharf; and A Midsummer Night’s Dream and Measure for Measure, directed by Sir Peter Hall, at The Ahmanson. Linklater’s other TV credits include Ugly Betty, Pushing Daisies, American Dreams, Gideon’s Crossing (series regular) and the television movies 5ive Days to Midnight and Live from Baghdad. He also co-wrote and produced the pilot Prince of Motor City for ABC with his wife Jessica Goldberg. 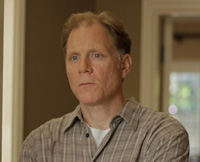 David Warshofsky (Marshall)
David Warshofsky is a graduate of the MFA program at NYU’s Tisch School of the Arts. He has been working as an actor in film, television, on Broadway and in theatre since 1989. His latest feature film credits include Unstoppable starring Denzel Washington and directed by Tony Scott, and Fair Game directed by Doug Liman. (Cannes Competition 2010). Among his other feature film credits are There Will Be Blood, Public Enemies, The Best Thief in the World (Sundance 2004), Personal Velocity (Sundance Best Film 2002), Welcome To Collinwood (Cannes 2002), Last Exit to Brooklyn, Oliver Stone’s Born on the Fourth of July, and Ridley Scott’s G.I. Jane. On Broadway, he has appeared in Biloxi Blues, Carousel and On the Waterfront. Other stage credits include Henry V at the New York Shakespeare Festival, Blue Window at Manhattan Theatre Club, Romance Language at Playwright’s Horizons, and the national tours of Biloxi Blues and South Pacific. He originated the role of Swetts in the world premiere of Tony Kushner’s A Bright Room Called Day directed by Oskar Eustis at the Eureka Theatre. He currently lives in Los Angeles with his wife, Kristina Lear, their daughter Helen, and his son, Macgee. 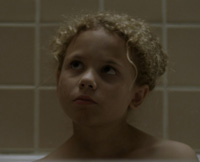 Isabella Acres (Gabriella)
Isabella Acres discovered her love of acting at age 3 while participating in various children’s theatre productions. Her professional acting career began in 2006 when she landed the part of Rose Crisp on ABC’s critically acclaimed office comedy Better Off Ted. Isabella has also done extensive voice over work, lending her voice to animated shows such as Phineas and Ferb, Scooby-Doo Mystery Inc., and Adventure Time. Her favorite hobbies include singing, swimming, dancing, Tae Kwon Do, Hap Ki Do, writing stories, and designing clothes for her dolls. 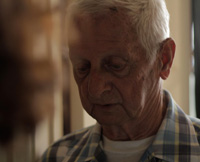 Joe Putterlik  (Joe, The Moon)
Joe Putterlik was born in 1929 and grew up in Chicago, Illinois. He and his wife, Carolyn, lived in North Hollywood, California for 40 years where he worked as a painting contractor and real estate manager. Director Miranda July first met Joe while writing the screenplay for The Future, and then wrote a character based on him into the film. He improvised much of his dialogue, and his scenes take place in his own home and make use of his belongings – including the holiday cards he made for Carolyn nine times a year. Joe passed away in November 2010. 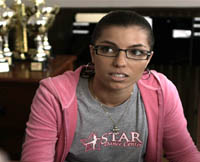 Angela Trimbur
Angela Trimbur ventured out to Los Angeles from Philadelphia to pursue the dream of saying other people’s words believably. She has recently appeared in the theatrical release of Rob Zombie’s “Halloween 2” and the MTV flick “Worst. Prom. Ever.” TV credits include: “The League”, “Community”, “Entourage”, “Reno 911”, and “Californication.” Angela is a regular performer at the Upright Citizens Brigade Theater in Los Angeles, where she recently put up her one woman show: “TRAPPED: Life As A Homeschooled Jehovah’s Witness”, a comedic portrayal of her bizarre childhood. Angela is a comedy writer and some of her work can be seen on Will Ferrell & Adam McKay’s popular sketch website funnyordie.com.